I don't really know how we've had such a stretch without reading - even with late nights, illnesses, early beds etc. it's still disappointing to not find the time to read together, but it feels excellent to have settled down properly again to resume the Picture Book Challenge!

Here's what we read this evening:

I've read funny stories by Jonathan Emmett, adventurous stories by Jonathan Emmett, and with A Secret Worth Sharing I can definitely say that he does heart-warming stories very well too! It's a story that touches gently on why sharing with friends is a happier route than keeping things to yourself, but acknowledges that it's normal to have these feelings, and I always think that this latter part is just as important as the former.

The reason behind Mole wanting to keep Mouse as his own secret friend is really very sweet; it celebrates a friendship that makes both characters very happy, and it also allows Mole to have something really exciting to enjoy in this little secret, which is perfectly normal for a child to crave. It's great for children to see at the end that things work out better for everyone when the secret is shared, too, to show that when you do manage to let go of these (more selfish) feelings, things often work out very well indeed. Vanessa Cabban's illustrations have the perfect level of warmth and cuteness to go along with the story, doing a particularly wonderful job with the expressions on the characters faces, whether happy or sad.

A lovely story for families to read to talk about why sharing our most precious things can bring about even more happiness. 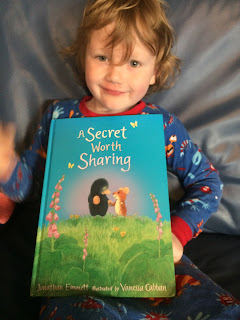 Chris says: Josh has always been fairly good at sharing, but books like these are useful for reminding him that, even though he won't always feel like it, he'll end up having fun with other children if he does so.

Josh says: I like that they all became friends.

2) The Koala Who Could - Rachel Bright (Author) & JimField (Illustrator) 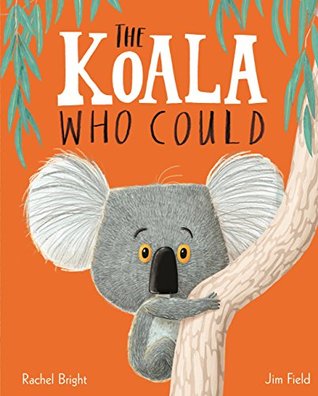 Some people hate change. They get oh so nervous about it, and I can well sympathise because I'm not the greatest lover of change in general either. Spare a thought therefore for poor Kevin, a koala who likes to keep things exactly the same and stay in his tree, even when his friends ask him to come and play, but who's about to be unseated by a woodpecker...

Rachel Bright and Jim Field teamed up in delightful fashion for The Lion Inside, which did a great job of showing that even the smallest of people can be as brave as a lion, and The Koala Who Could does a similarly delightful job of showing that it's normal to fear change and the unknown, but that by embracing it you might end up happier than you thought you'd be. Rachel Bright's rhymes are as warm and charming as ever, and Jim Field continues to be one of my favourite illustrators of all time.

Any story with a positive message gets the thumps up from me - doubly so when it comes from the minds of such a talented team! 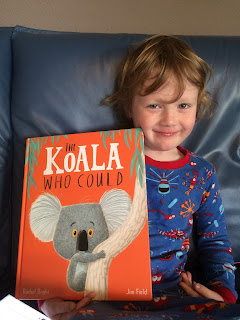 Chris says: I won't presume that you read every post of this blog religiously, but I often say how much I love a story with a positive message for children, and this obviously fits the bill superbly. It shows just why reading is so important, because it can help to gently raise an issue without ever making it into a big deal if you don't need it to be.

Josh says: I like how the koala made better friends when he was out of the tree. 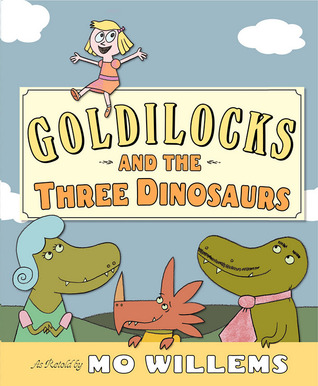 I tried to put off reading this for as long as possible, to preserve the pleasure of knowing we had this still to enjoy, but I couldn't put it off any longer. This is, without doubt, one of the greatest BOOKS ever written, let alone picture books. It is so unfairly funny that I can't think about it without bursting into fits of giggles. It's one of my three favourite picture books of all time, and I simply must INSIST that you go out and get a copy as soon as you can. Like, right now. Go. Begone with you. Even if you've read it before.

It's the most wonderful retelling of Goldilocks and the Three Bears, but with dinosaurs instead: Papa Dinosaur, Mama Dinosaur, and some other Dinosaur who happens to be visiting from Norway. It's killingly funny and self-knowingly ridiculous on basically ever page, from the way the dinosaurs loudly spell out there plans in totally not suspicious fashion, to the loud noise that sounds suspiciously like a dinosaur delighting in the prospect of a little girl to eat, but could have been a rock falling. Or a squirrel.

Essentially, this delightfully colourful story is everything I love about humour written down in picture book form, and it does humour better than 99.9% of anything you'll see on TV. Josh laughed at the thought of a dinosaur eating Goldilocks rather than bears, and the silly ways in which it looks like it'll happen; I laughed about 453% more often than him because I kept thinking back to previously funny things whilst reading new funny things, and thinking about the possible funny things still to come.

I would love to one day write books to make people laugh, but I've already given up trying to write the funniest picture book ever because Goldilocks and the Three Dinosaurs exists (along with the slightly different but equally hilarious I Want My Hat Back by Jon Klassen.

If you asked me what one book I thought people should read throughout their lives, this would honestly be there fighting with I Want My Hat Back for my nomination.

It's so good, I'm going to have to go and read it again. 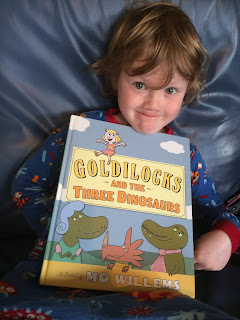 Josh says: I liked all the dinosaurs.

There were two important messages today on sharing and trying not to worry about trying something new in A Secret Worth Sharing and The Koala who Could, and then one of the greatest and funniest THINGS, let alone books, of all time with Goldilocks and the Three Dinosaurs. Josh certainly looked happy when we finished reading them, and I truly felt so happy that I couldn't stop smiling with him, such is the power of reading good books.

We've not had a single evening that we haven't enjoyed when we've read books for the Picture Book Challenge, but this definitely had to be one of the best!

Posted by Picture Book Challenge at 16:24